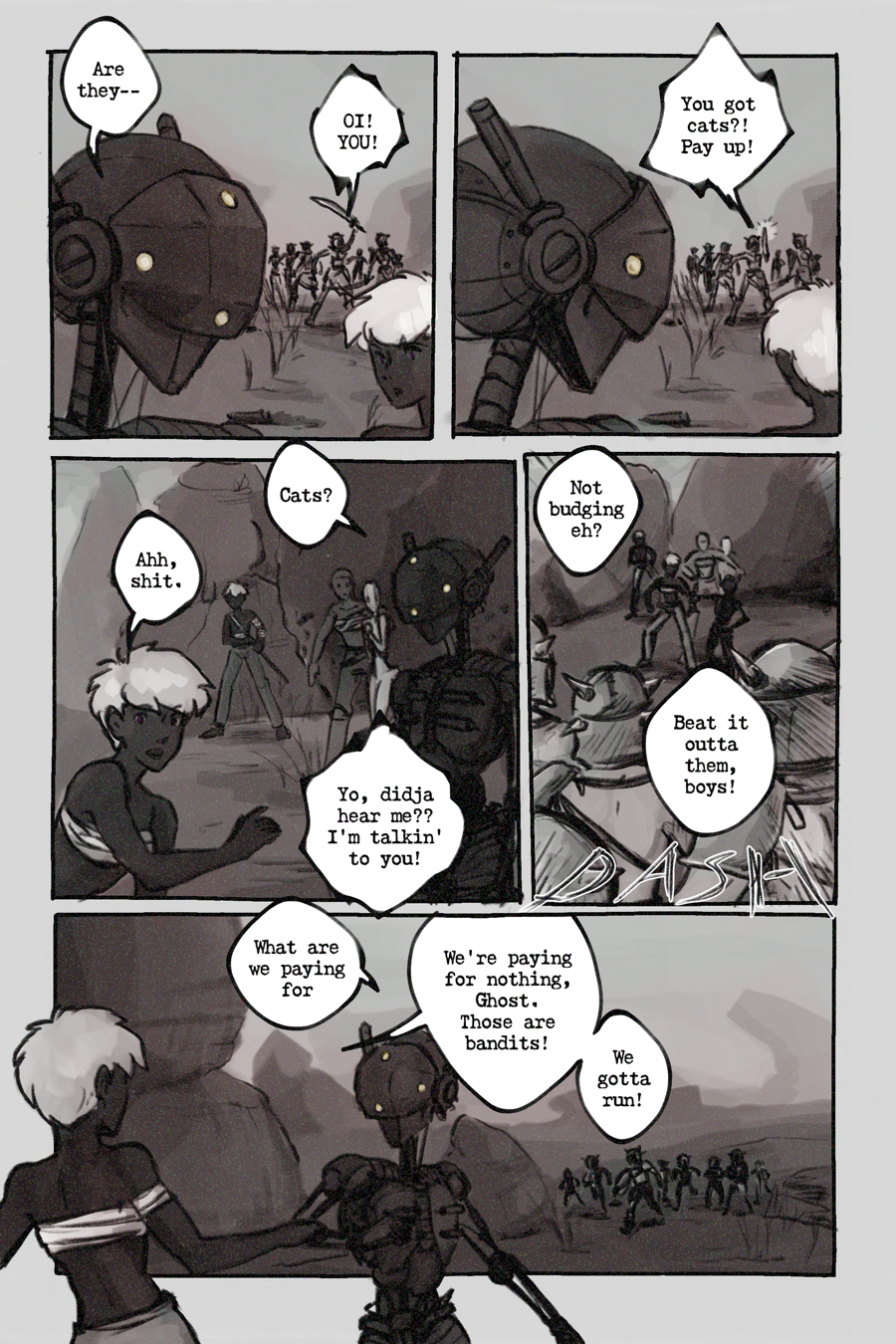 Last panel, was ghost supposed to end that that sentence with a question mark, or are you omitting punctuation to portray the emotionless speech of skeletons?

If it's the latter, I would recommend substituting the question mark instead of omitting it. It's hard to make a lack of punctuation look intentional, since it comes across as an error.

Another option is to use normal punctuation, but a more robotic font. That would add a lot more work though. Whatever you do, make sure it's consistent.

PS Props on the differently shaped voice bubbles. That's a great way to portray and differentiate voice that is unique to the comic book format.

ah, yeah, I was gonna talk about that but then I forgot to. Thanks for bringing it up! So-- this is actually a way I've done things for a while now. It's more frequent in my other comic "The Third Arbiter" (which goddamn it I REALLY want to finish that), but you're right in assuming that it matches up with a kind of flat, or dropping tonality. I usually associate it with a sort of cross question, or a very sharp "what". I could use a period where the punctuation would be, but all the times that I did, it just looked wrong to me. Hard to explain why.

Part of it I think comes from how I read novels in general. I frequently see my favorite authors ending dialogue in commas, regardless of whether it's a question or not. And to me that just like omitting punctuation altogether.
For instance just picking up a book and flipping through it we have "What do you mean," she whispered hoarsely. But... I know not all authors do that, either.

Just like not all authors end practically every sentence in "--" (with a chance of using the -- to segway into another sentence), but Andre Norton does it All. The. Freaking. TIME. I love her works, but it can get frustrating. Even so, my guess is that she did it that way because that was how she spoke, and how she imagined speech patterns.

So yeah. It is a design choice, albeit likely a poor one. But it also is kind of automatic for me, because that's my interpretation of speech in general. Or something.

As for the Skeleton thing-- Y'know, it took me a while to wrap my head around the concept, but I find they're not at all emotionless in their speech patterns. Tinfist is a prime example, to me at least, because he so easily conveys his feelings in just a few lines that couldn't be pulled off too well with a robotic tone. Some of them might CHOOSE to be emotionless (coughoughiyocough) and others might not be blessed with a "personality" to utilize, thereby defaulting to it (error...) Either way, it doesn't seem set in stone. But like, idk... that's just my interpretation, and what I go with for this comic. Nobody has to interpret Kenshi's subtleties the same way as the next person.

And hell, people might end up interpreting things about Senhyakkin differently from one another, too.
That's the great thing about narratives.

That said, I do use this sort of varied behavior to my advantage in the story, especially regarding Ghost. It is, how do you say, a chance to play with ideas.


This was fun to ramble about. Thank you!!

Ayyy, those are dust bandits! I'd recognize those helmets anywhere, typically right before I start pulverizing their bones to dust! Yeah if this crew couldn't handle the previous bandits, I'm pretty sure Dusts would be way out of their league