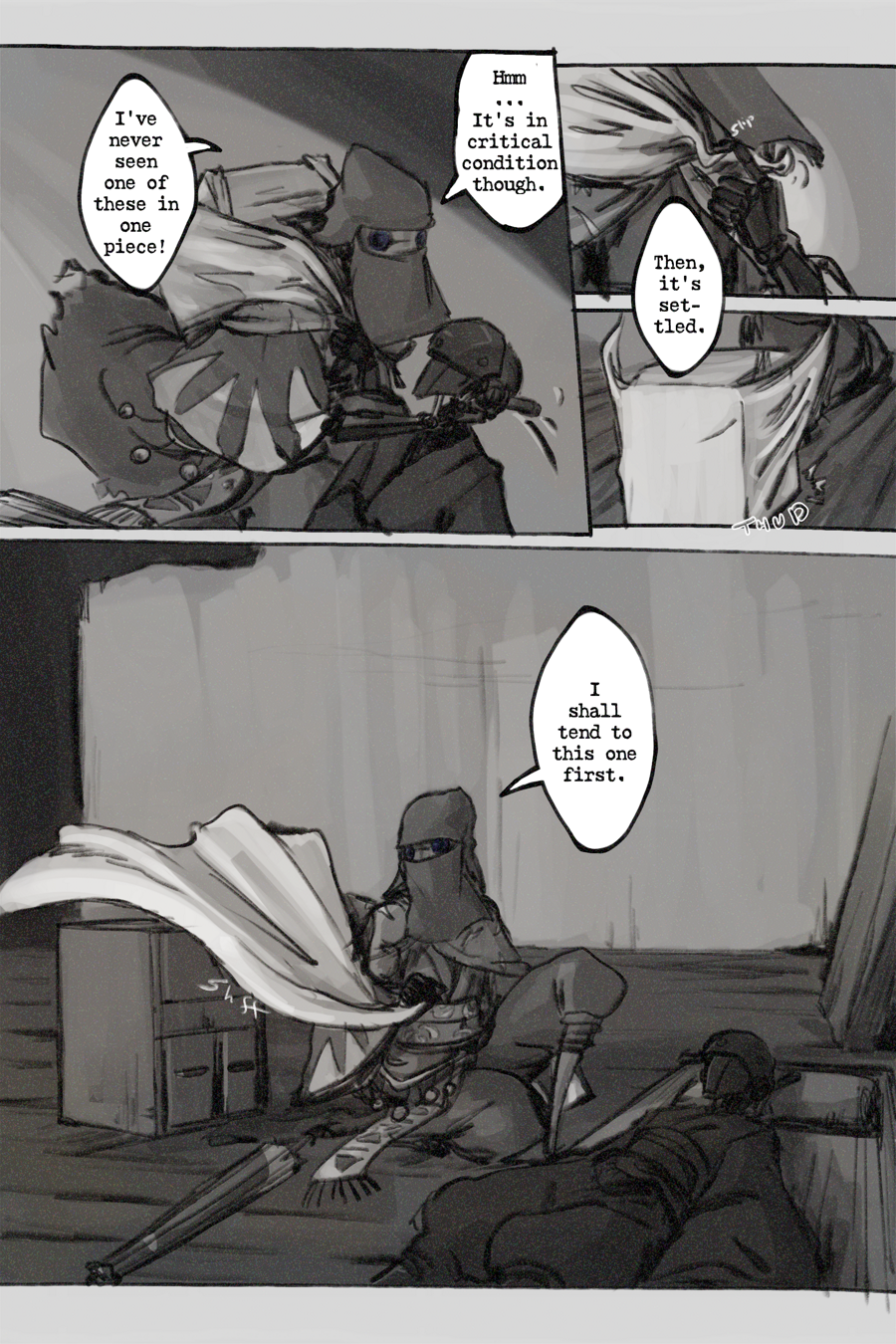 SO that's the end of Chapter 4! Again, most of it was a bit of a drag and it's definitely not my best writing, but there was payoff in the end-- and trust me, this chapter was necessary, as much of a dull, disjointed mess as it was. Things will only begin to escalate from here, and our lovely mysterious doctor is but a herald of what is to come. ...And that's all I have to say about that for now.

Now for the announcement I was talking about at the beginning of this chapter:

Chapter 6 is going to be split into two parts because holy mother Mary it is HUGE.
That means I'm gonna have to extend my chapter quota from 11 to 12. Not too much of a leap, but I felt it would be important enough to mention.
This decision was made with the assistance of my lovely Pledgers on Patreon. Thanks, guys!

Now with this chapter and that announcement out of the way, I can take a couple weeks working on my more official projects before I move on to Chapter 5. My hand has been doing well enough so that I think I'm able to actually juggle two comics at once for the first time in ages-- but I guess part of that is because, uh... I quit my job as a cashier.

You can probably guess why, given the current climate of things. But my biggest reason was that I was never compensated for the damages they caused my hands, plus some other shit I'm not gonna go into, annnd their actions over the last couple months just disgusted me so much I ollied the fuck out gracelessly. So for now I'm unemployed, and I'll have to go job hunting once all this you-know-what shit is over.

That all said and done, I'm gonna set the next update to July, or something. Hopefully early July, but we'll just have to see how it goes. As usual, thank you all for reading, please do leave comments, and I'll be seeing you next time!

Honestly,this is one of the most masterfully done kenshi comics i've ever seen. Reading through it was incredibly fun. Although,i've noticed that you often apoligize for the mistakes you have made on some of the panels,while improvement and self-awareness is important,it is also important to not beat yourself up too much. Be proud of what you have accomplished so far. Keep up the good work and take care of yourself during these times.

Thank you very much. I needed this. 😂

I can at least say that the next chapter is one that I'm incredibly proud of-- and I doubt that's going to change.

Regardless of what you might think, I thought that the first part had that sense of frantic running and hiding to it, reminded me a lot of what much of my early Kenshi was. The leviathan looked cool, and the art in general looked fantastic.
The story stuff was cool, and the new character is interesting.

It was a solid chapter.


Now I have to wait again :c

Thank you~ I definitely think the only reason I was getting so cynical about it is because I got tired of that Leviathan. Good thing it came out well regardless. Very much a load off my back.

Hopefully the wait for next chapter will be worth it. ;)

That was such an intense chapter!!! I actually went and read it twice, i really enjoyed the excitement and urgency in it. It kept rolling from one thing to the next and building up, and it was lots of fun. I love your panel design, and i'm super excited to see what's coming and what the new character is like. I absolutely love his design though, it's really cool!!!!

this is looking really good so far, fantastic work

This comic is so underrated, I just binged through it and I'm loving all the characters so far. The doctor(?) at the end has already won me over and I know absolutely nothing about him.